The days have been cold and gray again.  Oh Spring!  How temperamental!  So we’re back to the books and papers, trying to do what still needs to be done from Winter.  And studying.  I’ve been studying homeschooling for at least two years now. I may finally be learning something.

Allow me to preface this post by saying that I hold no hard feelings toward my parents or teachers (most of them) for my attitudes about education.  I don’t know who I would be if I didn’t have the life I have had.  That life included attending this rural public school.  I’m glad to be who I am and have this life, so that’s that.  I can also see, looking back, that everyone personally involved in my learning was doing the best they could do.  There’s nothing more to ask.  Also, this is NOT written with an iota of criticism towards my many friends whose children attend public schools and thrive there.  This is just my own exploration.

I credit my parents, and a few exceptional teachers, with my education.  The real learning I did in my school age years was due to their support and participation.  I’ve felt this way for a long time, and this thought is what initially inspired me to want to educate the children at home.

Actually doing the educating has been another story altogether.  That’s where the soul-searching really began.  I guess it’s been said over and over, that if you want to find out how much you know, try to teach.  I began to try to teach my daughter, and very quickly discovered that I really didn’t know much.  Specifically, I didn’t know how to teach her.

My girl Lulah is strong.  She was born with a streak of will power, a dash of temper, and  a cherry of pure strength on top.  She stuns me.  She teaches me about LIFE in ways I never saw coming.  If she had been a more complacent child I never would have made this journey.  I am challenged.  I love her for that. 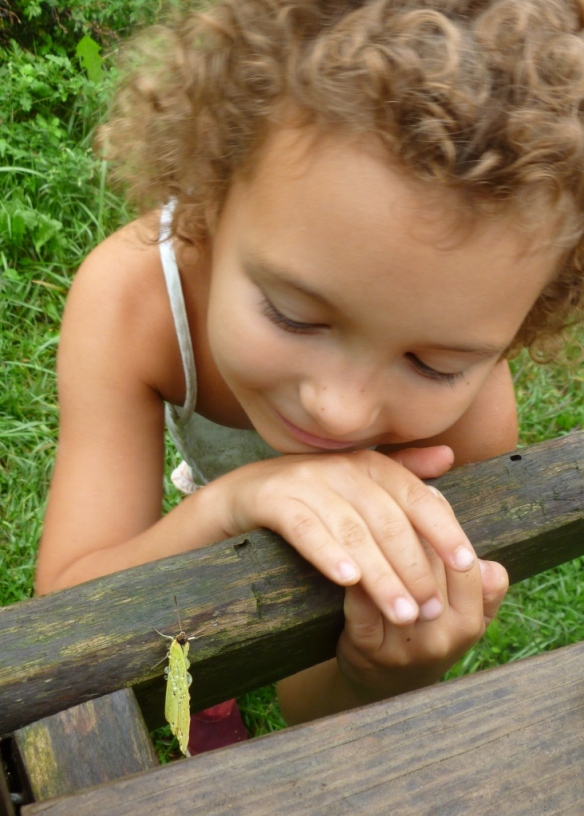 As soon as I began to “teach” her what seemed to me important “teachable” stuff, Lulah resisted me with every ounce of her strong little being.  I was a little miffed, doubled my efforts, and we struggled through each session.  Afterwards, we would both have to recover in order to hang out again.  School meant minor, and sometimes major, warfare.

So I was caught.  Some part of me believed that I had to just muscle through this, and eventually she would relax into it and we could have a “normal” homeschool experience.  And another part of me thought this was just WRONG, and frankly didn’t know what to do.  Summer arrived and the first “school year” ended, so I let it go and decided to study.

It’s been a long road, this study.  I started with Summerhill, by A.S. Neill.  A-ha!  Free school.  This is good!  But there’s community.  But…  But… But… I couldn’t sink into it.  It was too far from my own experience.  I enjoyed the works of John Holt, but still couldn’t integrate it.  Finally I put my hands on Dumbing Us Down.  John Taylor Gatto is so smart and right on target.  Reading his work helped me reflect on what had happened in my own school experience.  What was it?  What do I remember?  Can that really be?

I remember almost nothing.  Really, nothing.  Reading, writing, and basic math happened early enough that I have few memories of the learning itself.  Other than a few snippets of concept, a couple myths, and a stray piece of literature, the content of my public education has not stayed with me.  What does this mean?

To be honest, I don’t know yet what it means to me.  It may take a few more years to get clear about it.

What is clear is that school was a chore to me that often made no sense.  I knew I had to go, and I had to do well.  So I did.  And that paved my way to college, where I was fortunate enough to land at a very small liberal arts school that actually emphasized independent, creative, critical thought.  And so I did some actual learning there, but it was a new and strange process and I spent a good deal of time just learning to organize, think, and learn.  I was out of school, exploring the world on my own, before I became an organized self-educator. And it was not a neat and tidy process.

After 12 plus years of compulsory public education, all I knew how to do was teach as I was taught.  What a drag!  No wonder Lulah was bucking my efforts.  As I reflected on her struggle, it became all too familiar. I remembered that no one ever explained mathematics to me in a way that felt good. If the equations went over my head, the talking teacher, far away at the front of the room, just seemed to repeat the same explanation over and over, and it never touched me.  So even though I liked word problems and shapes, I ended up muddling by with angstful resolve.  To this day I have a rudimentary way of going about numbers (my Fellow Man Around Here says I do math like an english major), but have found that when left to my own devices I eventually begin to enjoy it.

Notice that: “left to my own devices”.  No one ever does that in public schools.  I hadn’t done that with Lulah.  It hadn’t even occurred to me. It is so hard to stop doing the only thing you’ve known how to do.  It’s a particular leap of faith to do it in relation to something as crucial as your child’s education. 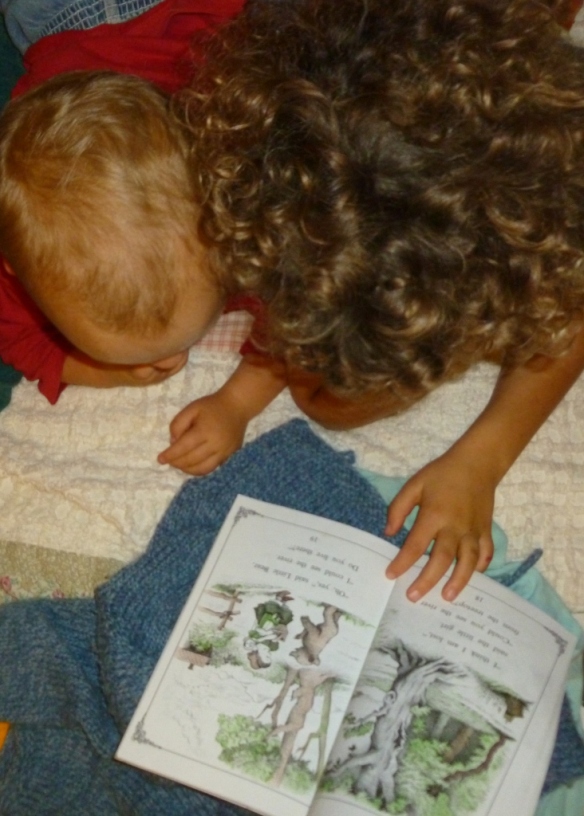 Anyone can see my daughter is smart.  So why doesn’t she like to read at 7 years old?  She CAN read now, but she isn’t interested.  Perfecting her handstand, collecting flower seeds, building fairy tree forts, grinding creek stones to see what colors they make, dancing the stomp dance in the rain, all these things are much more important.  Am I worried?  When the world creeps in, maybe, a little.  But I can also see how she is right in her own world, and she loves to read, when she’s good and ready.

This is not to say that we live a child centered life of whimsy.  This is still a farm, and we run three small family businesses.  We like structure.  Lulah and Levon participate in the rhythm of our family, like it or not.  I just don’t believe in imposing an arbitrary curriculum on them that is irrelevant to their lives.  Lulah reads and writes, does math, and explores many facets of sociology, biology, and physics mostly in relationship to her daily life. We’re here to make sure she gets help when she needs it to move forward, and to stand amazed when she leaps ahead on her own. In some subjects, she’s likely far ahead of her peers.  In others, she’s probably behind.  Seems like the same would be true in a public or private school setting as well. 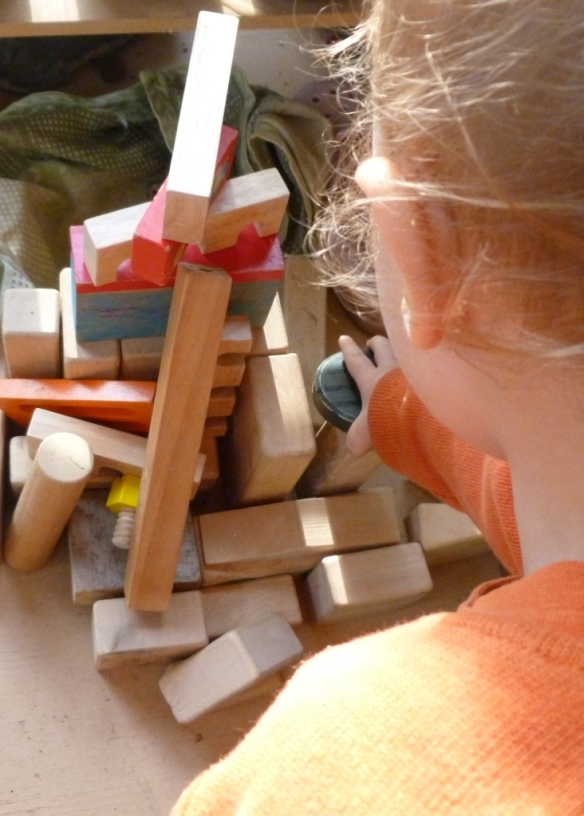 After examining my own experience, I feel more confident.  It took me a long time to get organized inside myself.  I believe more and more now that if I had the freedom to organize myself from the inside out when I was so young, I would not have had to make so many mistakes in my disorganized early adulthood.  I can’t imagine now who I might have been in that alternate reality.  It’s not important; I’m glad to be who I am.  I’ve finally unschooled myself.  I know I can learn, from the inside out.

What is important is for Lulah to imagine herself from where she is now.  And I can believe in her, support and aid her vision, and see that she has the tools to create her own life from deep inside her own brilliant person. 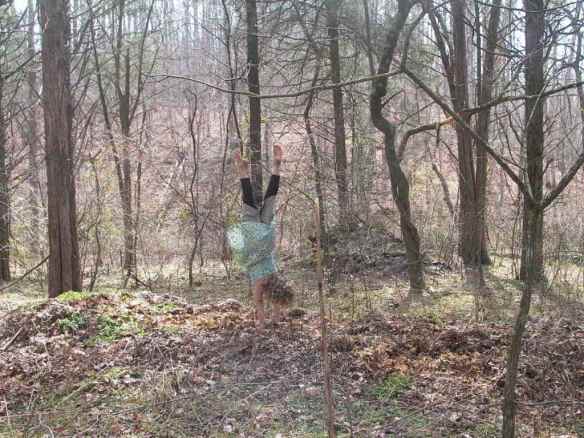 16 thoughts on “who gets unschooled?”