On a cloudy, rainy day years ago when I was very pregnant with my sweet little Opal, I took a moment’s rest in one of my favorite places: my rocking chair on the deck. I had probably just gotten then two-year old Ira down for a nap. All was quiet in my contemplative moment. And then, like a subtle breeze, a barred owl lit in the branch of a tree that reached out towards the deck, not ten feet from me. She (I don’t know if the beautiful bird was truly a she, that was just my instinct) was busy hunting, her head was mechanically turning this way and that, scanning the ground for movement. In one grand turn of her head, she sat looking directly at me. We locked eyes for quite some time, those dark cavernous expressionless eyes piercing, yet gentle. I sat perfectly still, probably holding my breath, in absolute awe of the incredible huntress. Without emotion, she turned her gaze back to the ground, back to her hunting. She did not startle. She did not flee. She clearly felt no threat from me. She knows me, I thought. 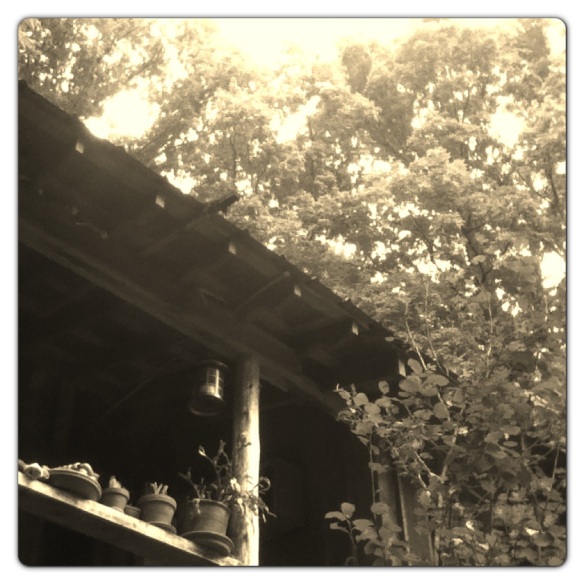 Barred owls have been present here far longer than Eric and I. Those owls have seen so much happen in this little clearing over the years. I’m sure that they have been watching us. They’ve seen a tiny cabin grow bigger, and bigger again. They’ve seen just two humans turn into five. They’ve listened to the quiet grow increasingly louder, as those five humans found their voices. They’ve seen dogs, goats, chickens, ducks, more ducks, sheep, cows, and now a kitten join the scene. I’m sure they’ve seen far more than I realize. But, they remain. They continue to share this hollow with us despite all of the change (and commotion?) that Eric and I have brought in our efforts to make a homestead. I like to think that they stay because we are still maintaining a habitat suitable for wild creatures. (After all, we are raising three wild creatures!) I hope that they choose to reside here because we nurture our surroundings. And that we make good neighbors.

We’ve been watching them, too. We’ve seen them nest in a hollow beech tree just behind the cabin. We’ve seen a family of raccoons take over that lovely nesting location the following year, forcing the owls to move to the thick stand of cedars on the hill opposite the cabin. We’ve heard their wild chatter at all hours of the night, so convincingly monkey-like. We love sharing this hollow with them.

Once, following a Christmas holiday at “Gammy’s”, Ira was given a crazy little remote-control flying contraption (that resembled a helicopter) which he was eager to test drive. Eric and I were with him on the patio, reading instructions and giving verbal coaching to Ira. But he couldn’t coordinate all of the levers and the thing was flitting this way and that on the ground, all the while making a high-pitched whirring noise. In a flash, an owl swooped low as if to strike the toy, but flew on, not bothering with the hunk of plastic and stryofoam. We all stood agog and in utter amazement just looking at each other… Did that really just happen? Ira was pretty excited to see the owl, but also pleased that his new toy was spared.

In the pre-dawn hours on Saturday morning, as I was putting the finishing touches on preparing to depart for market, a pair of owls were busy with their call and response chatter… a splendid way to start my day, I thought. On one trip out to the truck, guided by the darkness of a malfunctioning flashlight, I walked under the giant sugar maple that is the centerpiece of our homestead. In a breath, I heard three nearly silent wingbeats directly over me. I felt them… the wind like a whisper in my hair, my ears. I turned to follow the direction of the flight but, of course, I could only see darkness. My mysterious friend could certainly see me, though. I’m pretty sure she was just saying ‘good morning’ and that she would see me later, even if I couldn’t see her. I smiled and said ‘hello, friend’ and felt comfort just knowing that some of my closest neighbors have wings.