I swore I would never ever have another goose. Not after Cyrus.

Cyrus was a pretty white gander that came to live with me when I was living in the wilds of southern California. As the story goes, my friend and I saw the poor goose at a feed store, isolated in a cage all by himself (should this have been a clue?), where we had gone to pick up some chickens for my friend. (Mind you, I just went along for the ride. This was a point in my life when I didn’t want any dependent pets, other than maybe a dog that could be my companion and tolerate my free-wheeling life. I’ve never known chickens to be very good road-trippers!) So my friend, who lived in a crowded neighborhood in Ocean Beach (San Diego), decided to take him home along with his new chickens. He was living in a communal situation, where he and his house-mates kept a nice little urban permaculture garden in the yard, and thought chickens (goose?) would be a fitting addition to the scene. Well, it didn’t take long for his neighbors to begin complaining about the early morning honking sprees, and my friend needed to find a new home for the goose.

I was the obvious default home for Cyrus as I lived in an isolated house surrounded by trees, just one neighbor, absolutely no traffic, and even a pond. I’m typically game for new challenges, so I agreed to take the goose (and somehow the chickens became part of the bargain as well!) For awhile, life was fairly smooth with Cyrus. It was even rather picturesque having the white goose gliding around on the pond that was surrounded by live oaks, manzanita, white sage, and big granite boulders. But then Cyrus turned mean. Anytime he would see me coming out of my house, he would basically lower his head, extend his neck, and charge me. If his incredibly deft bill was able, he would pinch the shit out of my legs and proceed with flogging me until I could free myself. Lots of well-meaning folks gave me advice on how to best deal with the situation (I was a vegetarian at the time, so eating him was out of the question), but nothing worked. I even took to carrying around a baby safety gate as a shield to ward off Cyrus.

One day, my sole neighbor, a single middle-aged woman, was having a tea party. All of the ladies showed up with their dresses and gloved hands. Charming Cyrus was out on the pond looking as lovely as ever. When the ladies convened around the pond’s edge, giddy with excitement to admire our friend, he quickly exited the water to give them his version of a welcome. The ladies apparently had to fend him off with their purses (I wasn’t there to witness the scene, I got the run-down from my incredibly tolerant neighbor). I will admit that I didn’t feel like a very good neighbor at that point. A few weeks later, before I arrived home from work in the evening, Cyrus was attacked by a large coyote. My neighbor said she heard the horrendous squawking, opened the door, and when she saw what was happening, decided her best option was to just close the door again. I guess I can’t blame her. So that was the end of Cyrus. And I have sworn for all of the years since that geese were not for me.

Enter four adorable Brown African goslings. Oh my. From our research, these are one of the mildest mannered breeds of geese. Supposedly, with lots of handling when they are young, these geese become quite personable and refrain from attacking the hand that feeds. I’ll say I’ve got my fingers crossed. Their purpose here on our farm is to be the daytime watch-dogs for our chickens. We do keep a guardian dog with the chickens as well, but she is most often on duty at night. During the day, she often sleeps in the shade leaving attacks from hawks completely unguarded.  As far as the handling goes, Livi has that one covered. She is always eager to visit the “goose-lings”, and will sit with them for long spells while Eric and I tend to the garden or other chores. They are kind of irresistible…

So, as long as these little critters remain nice, and don’t try to “goose” me, their gooses won’t get cooked. I’m hopeful. 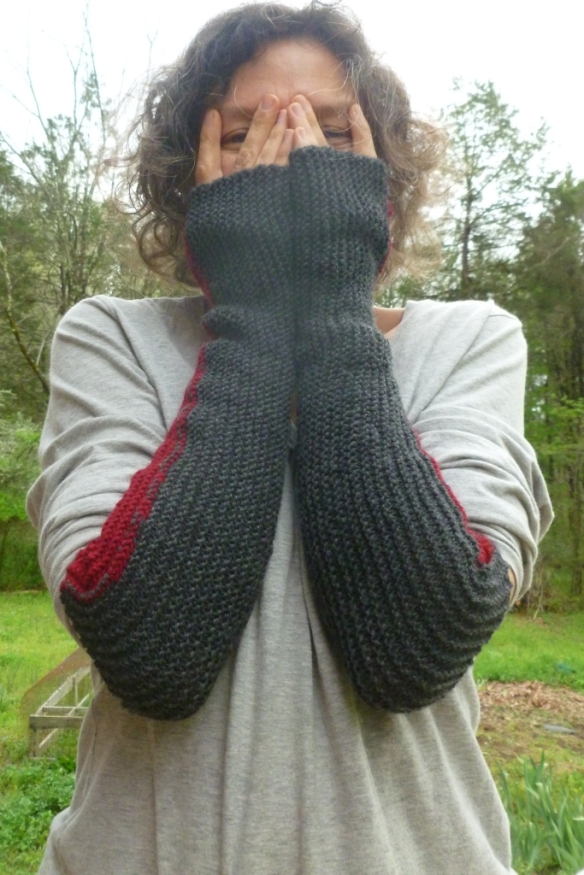 Even though the weather is balmy now…

I am pleased with these arm warmers, complete at last.

Using simple, beautiful worsted merino wool, cast 80 stitches onto long skinny needles, and work with the colors you liked until it is about six inches wide (depending on the thickness of you arm).  Sew long sides together in something resembling a mattress stitch, with a thumb-hole left just where you want it – or maybe no thumb-hole at all.  Good easy fun.

we hosted our first waldorf third grade farm trip in 2002, the spring my oldest son turned 3. i can remember it like it was yesterday, those children, now into college and beyond, gifted my family with so much.  despite a total lack of infrastructure, those kids had the time of their life. they stayed in tents behind the barn, milked goats, and dined al fresco. they shared with us hand knit toys and ideas for felting wool. we shared with them our farm in her infancy.  together we tried every possible farm task that the season and weather would allow and from that moment on, we were thoroughly enamored with the annual farm trip.

when the years passed and i attended that class’s 8th grade graduation, i cried and cried as the children reflected on their elementary years. one child in particular described in detail his 3rd grade trip to hill and hollow farm as a pivotal moment in his education. it was then i realized truly the significance of these few days in the lives of those children, and in our roles as farmers, educators and parents.

alas, here we are 12 years later. we have refined the curriculum. we long ago built a cabin in the woods to accommodate such groups. i have streamlined the kitchen and the menu to do our best to feed. despite these changes, one might call improvements, one fact remains unchanged, the pure awe of the farm trip. these days are the culmination of the 3rd year curriculum in waldorf schools across the globe. i spoke more in depth about it here but words can not describe the preparation, the anticipation and the fruition of everyone’s hard work to make these days special time and again.

waldorf education is unique for countless reasons, i dare not try to outline them here. there is one amazing aspect that truly resonates with me in the wake of this year’s visit from the waldorf school of louisville. in these schools, the teacher stays with his or her class from first through eighth grade. whew. commitment friends. to truly educate, there must be an environment of trust. trust between student and teacher. trust between parents and faculty. trust between school administration, faculty, parents. now that is a whole lot of trust. one then asks, or at least steiner asked, how can that trust be established and reestablished each and every year? from my perspective from these tiny glimpses into my region’s waldorf schools, these classes and these relationships, i see a true treasure.

we spent much of last week enthralled with a tremendous 3rd grade class, their phenomenal lead teacher and a handful of wonderful parent chaperones.  we sowed and hoed and planted and worked together.  in the wake of some fairly intense days on the farm, we have spent countless hours reflecting. to summarize would be impossible, but once again i am so delighted with the outcome: for the 3rd graders and for us. there is nothing better than the joy of sharing our life and offering others a glimpse into our reality.