i’m fairly sure i am not alone in having had a teenage super star crush. whether it be tv, film or music, i imagine everyone can recall that beloved heart throb you dreamed about. mine was bruce springsteen. no one could count the number of hours my best friend and i spent listening to the music, chasing after unusual tracks, swapping bootleg tapes (you know readers, cassettes). we went to as many shows as our teenagehood  would allow and stopped short of nothing to meet the man himself, an event that actually happened in the parking lot of that sheraton hotel in rosemont, il. sometime in the mid eighties (date please jeannette?)

my life’s path veered away from bruce’s trails and those of my dear friend, but she stuck with bruce seeing shows around the world and back. in recent years, once the internet reconnected my friend and i,  the thought of a shared springsteen experience has come up again. there was talk of chicago, an attempt in louisville but it couldn’t come together until last week, bridgstone arena,  april 17th,  nashville.

the last time i hugged these two dears simultaneously could easily have been our final field hockey game of our senior year in high school, 1984. the last time i saw bruce springsteen was in college, not long after. in the first minutes of greeting my old friends, the decades evaporated and i was full of that familiar love that you can only feel with people that have known you long and well. in the flurry of preparing for the show (a process far different from what i can recall) we caught up on years of life. the joys and tragedies that we each have experienced in our twenties, our thirties and our forties. gosh.

we arrived at the venue hours before the gates opened to get a numbered wristband. i was soon to learn that at 5:00 they would cease offering the wristbands and promptly draw a number. the person wearing that numbered band and the 399 people sequentially following,  would be allowed into the pit, the area front and center, of the stage. in these hours i gradually met countless people who comprised the amazing circle of bruce fans that were travelling buddies of my old friend jeannette. these folks not only invited me into their world with open arms, but they also, i was soon to find out, had a special spot for us, a place from which we were to view this reunion concert, it took a few hours to unfold, but when i discovered the spot they had in mind, i couldn’t really believe it, yep, it was the front row.

perhaps it goes without saying, but i am going to say it anyway, i had the time of my life. i was dancing and singing like i hadn’t in, well, i can’t remember when. in those hours that began in the mid afternoon and didn’t end until well past midnight, my heart soared over and over again. i was embraced by friends old and new and listened to some pretty amazing music. it was somewhere in the middle of “spirit in the night”, with my hands reaching out and touching bruce himself (this was to happen over and over again throughout the show) i was filled to the brim with the moment. it was an unusual one for me, rock concerts are not in my normal routine. somehow the company of my oldest friends, the support of a new group of people, and the familiar tunes of my truest rock star love came together in the most memorable of evenings. now, days later, i still have lyrics dancing in my head and spilling out of my mouth (the kids are finding this completely hilarious), amazing thoughts of that wonderful night, and the deepest heartfelt thanks to all that made it happen…you know who you are! 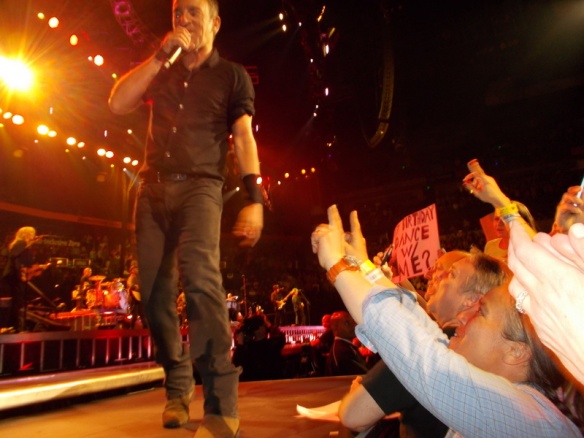 show a little faith there’s magic in the night

6 thoughts on “a reunion”