The wave has crested. We have reached the far side of the summer.

Down here, that means it is hotter than ever and the ragweed, ironweed and eupatorium are towering and swaying their flowers over our heads. The air is like a wall of water. Threats of rain don’t mean much. We’re already soaked.

None of us are sad to see the tomatoes begin to decline. We’ve been drenched in their abundance, unable to get them to market in time to be used, unable to pick them all before the hot wet days crack their tender skins. They do not get eaten, but there is no waste here. They get thrown to the chickens. They fertilize the fields.

Each year, we grow new varieties as “trials”, just because they sound good. Just because we’re curious. Sometimes there are some real winners in there. Sometimes, not. This year, the Vorlon and Dora tomatoes are keepers. Both turned out huge gorgeous delicious tomatoes that would have taken ribbons at the fair, had the timing been right.

At the same time that we were loving those new fruits in the patch, it looked like one of our old favorites was taking a turn for the worst. The Paul Robeson, one of our all time favorite tomatoes, didn’t seem to be thriving. A couple plants died early and a couple more just didn’t look as robust as they should. I had thoughts of maybe phasing out this stand-by and working more with one of the new varieties instead.

That was before the August rush. This last big rain, followed by the big wet heat, sent the patch into overdrive. When the heat wave hit the tomato patch, the Vorlon and Dora plants lost their cool. The fruits split and cracked and the vines withered to almost nothing. The Paul Robesons on the other hand, whose seeds we have selected for at least five years now, were relatively un-phased.

Take-away lesson for the day – keep with it. It may still be working, even if it doesn’t look like it.

This is not to say that we will not develop our own seed stock of the Vorlon or Dora tomatoes. There’s always room for improvement, in any chosen direction. It just pays to maintain direction.

It would be easier sometimes, to NOT. On many levels. Sometimes I think there are too many fruit flies involved with this seed saving thing; is it really worth the effort? Sometimes the number of things to do is sheer-ly overwhelming. Sometimes I’m tired of picking tomatoes in the hot sun. And then I get reminded…

“Through faith, which will give sufficient energy to achieve success against all odds, direction will be maintained. The realization of the goal of Yoga is a matter of time.”

Mr. Desikachar adds: “The goal is the ability to direct the mind toward an object without any distraction, resulting, in time, in a clear and correct understanding of that object. Faith is the unshakable conviction that we can arrive at that goal. We must not be lulled by complacency in success or discouraged by failure. We must work hard and steadily through all distractions, whether seemingly good or bad.” (gratefully quoted from The Heart of Yoga, by T.K.V. Desikachar)

Please, follow me while I turn this plow onto another row. The same garden of thought, just a different crop.

During those times, I might contemplate taking up Tae Kwon Do, or doing Zumba. Not bad things to do in and of themselves, and they might be good for me too. But, in reality, I shouldn’t stop doing yoga. If anything, these little impulses are my wake up call, to not be distracted, to remember where I’ve been and what I’ve learned, and to keep practicing, however I can, whenever I can.

For awhile, it looked like the Paul Robeson tomatoes were failing.  Sometimes, it doesn’t feel like my yoga practice is helping me the way I want it to.  But the fault is with my own perception, my own faith, not the tomatoes, or the yoga.  There’s always room for improvement, and the way toward it may not be fast. Things are rarely as they appear, especially through the colored lenses of the mind’s eye.

Keep the faith. Stay with it. This applies to everything. 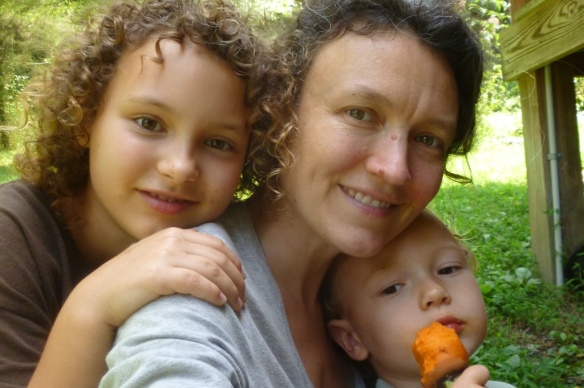 this week we celebrated our wedding anniversary. so i can’t help but be thankful for a great man, a wonderful marriage, and some decent sushi. 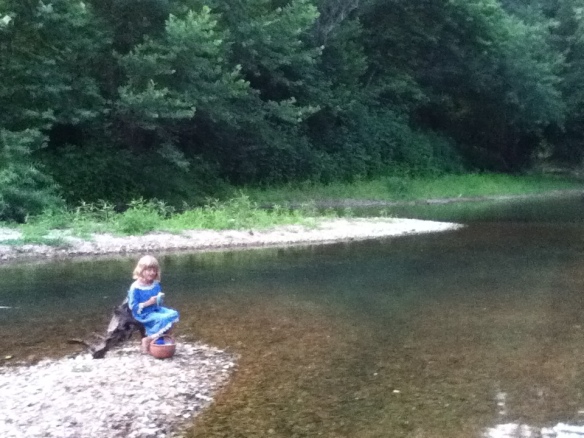 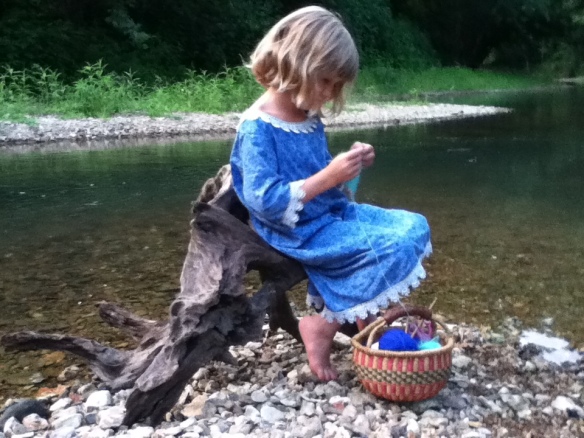 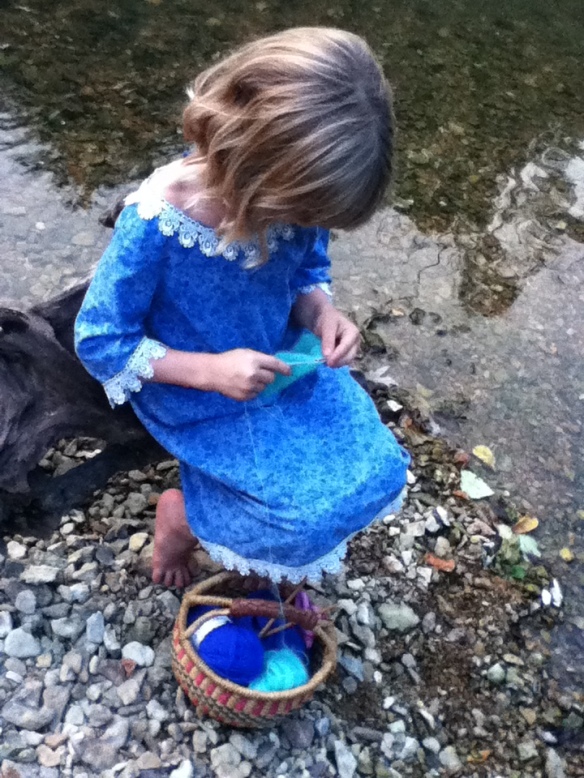 Opal has become a prolific knitter over the past year or so. More prolific than me lately, as it seems all of the hours that fill my days get filled by so many other things. I’ve been craving getting started on a new project… maybe when I get finished canning tomatoes!!! Anyhow, Opal has multiple projects going at any one time and she hauls her knitting basket with her throughout the days. She knits on the golf cart while she waits for Eric to do chores, she knits in the milking stanchion while I milk Lilly, she knits on the porch swing and on the couch, and in the pictures above, she found an interesting driftwood perch and sat herself down by the creek to knit a few rows while I was washing the day’s sweat and grime from my body. Bless her, sometimes when she sees me racing around like a chicken with my head cut off, she will beg me to come and sit with her, and knit. I love that.

Well, dear little Opal, these days are getting shorter and shorter. It won’t be long till we can sit together around the wood stove and share some knitting time.