Ok, so… It’s the time of year when little mice like to find their way into the snug house for the winter. I don’t particularly like sharing my house with mice. They are not very tidy or discerning creatures. And after more than ten years of being a mama, I wake up at the slightest noise… have you ever heard a mouse trying to get into the sweet meat of a walnut in the middle of the night? Or rolling an acorn across the floor? Right. So when I get awakened in the night by a wee little mouse, I don’t feel very nice. I set traps. Well. I killed a mouse in a trap that was apparently a mama mouse because a couple of days later, while cleaning the house, I kept hearing the oddest little squeaking noises. I tracked the noise down and found a clutch of five orphaned baby mice. I made the mistake of showing the girls my find because they immediately got a basket and bits of cloth and proceeded to make a home for their new pets. Uggghhhh. Being my practical self, I made no bones about the fact that the baby mice were not going to live very long. But there were two that lived surprisingly longer than I thought… probably because they were getting fresh Lilly milk (Can you believe I actually allowed some of my precious hand-milked cow’s milk to be shared with doomed pet rodents? Oh, the things a mama will do for her children.) Long story short, the mice died. Livi was devastated, too. I mean,  we live on a farm and the life/death cycle is something the children are very accustomed to. But for some reason the death of those last two mice left Livi quite sad. This was just before her birthday a few weeks ago. So as a birthday present, I did my best to honor her loss by making two needle felted mice. It was my first go at needle felting, but remarkably satisfying and fun. (As long as I didn’t jab myself with the needle too much!) I gave her the first one completed but allowed her to watch the process unfold with the second one… like watching a wad of wool come to life. 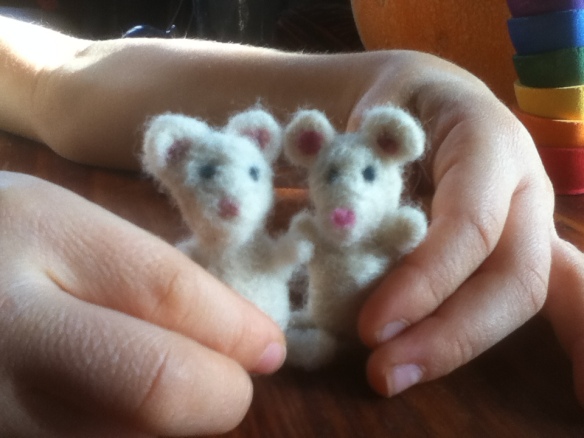