Keep walking, though there’s no place to get to.

Don’t try to see through the distance.

That’s not for human beings.  Move within,

But don’t move the way fear makes you move.

We’re slowly beginning to work our garden in a new way, and I like it.

See – we often don’t cover crop the beds of crops that stay for a really long season and require a thick layer of mulch. And if we mulch well enough, the mulch stays, maybe not completely intact, but thick enough, all winter. Come Spring, there’s still mulch, and maybe a little henbit and patches of new growth coming through, and the ground is so soft. It’s a little colder than the open ground, but the softness is what interests me.

On these places, we are beginning to to put MORE mulch, and just plant right into that soft soil. We will walk on these beds as little as possible.

When I put a spade into these mulched beds, I see live worms, disturbed from their dark quiet places. Just the smallest disturbance sends them wriggling to the surface. When I see them it makes me glad. I think “Look at those worms that I didn’t kill.”

When we use heavier equipment on our soil, which we do sometimes, it’s hard on the little life underneath. We turned the ground for our pea row and as I planted the peas, I found the bodies of those worms that weren’t low enough in the ground to avoid the disturbance. There were survivors, too, but all had been battered by the machines that passed through their living space. And that’s really OK too. The worm population by and large is thriving around here and their bodies go back into the good earth, but it feels good to be moving in a direction that lets more of them live. 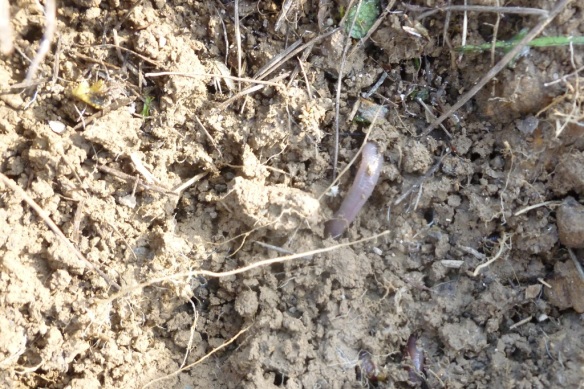 I want to be gentle to the soil, so that the soil will be soft.

It’s a choice, and also a privilege.

Before our (small and reasonably priced) land was paid off, we worked our land harder. We were growing for more people. We were under greater pressure, and that pressure in turn was applied to our soil. We still used the best practices we could, but we sometimes had to make hard choices.

Relieving the debt pressure relieved the growing pressure. Our income stream diversified, and we now have more room to choose different ways to grow. We can choose to be more gentle. We can take risks with our production in the direction of softness.

We took Lulah horseback riding last weekend. The riding ranch was a beautiful place (Grey Wolf Ranch). Before the ride began, we were engaged in a interactive demonstration of the owners’ philosophy of horsemanship. There was talk of the horse as a metaphor for life. There was talk of “gentle but firm” in terms of respect for self and others and the weighty concept of “control”. The idea being that it is necessary to fluctuate our use of gentleness and firmness in relation to whatever the situation at hand demands. We were given plenty to think about, and then we were taken on a beautiful ride through a green Tennessee valley.

I’ve been chewing on the conceptual framework of that horse ride throughout the busy week in the garden. That constant moving target of how gentle to be, or how firm, stuck in my head. It is obvious that we have to continually adapt to life’s situations, on a horse, on the land, in business, in general. Stagnation leads to sickness and death. Over-reaction wears us out and results the same. There are times when we need to work the garden deeper. There are times to use a machine to save our bodies. But the real deal is to recognize where we stand at any given moment.

Another important piece of this, seems to me, is actively understanding our motivations in each situation. Are we under the gun, under the sun, knowing a storm is on the way and having to hustle to get it all done? Are we under pressure to make a payment, start bringing produce to the market early, get an edge up in the face of growing competition? Are we afraid? Fear can be helpful in determining a present danger and taking steps to ameliorate it. Fear can also be terribly dangerous if it is not recognized and acted on appropriately. Fear out of context, nagging in our brains, running amok in our nervous system, can make us freeze (stagnate) or run (over-react), neither of which make for a healthy garden, business, family, or world.

Interestingly enough, greed works much the same way as fear. And those two – fear and greed – are the primarily players on the emotional side of the political and economic world. This is why so many of have chosen to opt out, as much as we can, from that world. We are not free of it, not by a long shot, but we choose, again and again, to move toward greater stability, fertility, health, beauty, LIFE.

Love your local growers this year. Support their work and eat the food they grow without fear. With each bite, we choose a step in a new direction, a step toward softer soil.

3 thoughts on “gentle but firm”