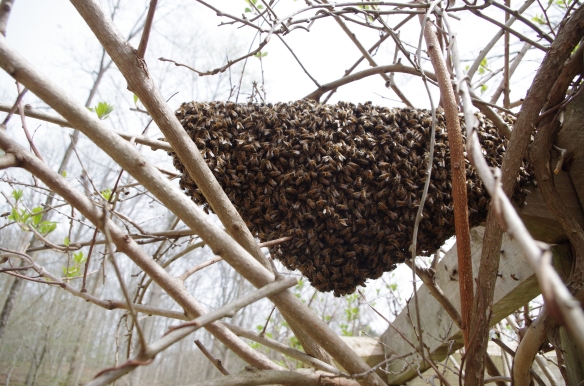 This week, our normally quiet little homestead was all abuzz (literally!) with activity. The honeybees have declared that swarming season is officially now. Five swarms have issued from my two hives in five days. I was able to catch and hive three of them, and the other two were in easy reach but departed so quickly I barely had time to catch my breath after standing in the midst of the spiraling frenzy of thousands of stinging insects.

I have never minded having my beehives swarm as long as the remaining colony is strong and healthy. I may change my tune someday, but to me, swarming gives me hope that the dwindling honeybee populations have a chance to rebound. Even when I don’t catch the swarms, as I watch them take off through the canopy of the forest, I blow them a kiss and wish them strength and health and longevity. I also fantasize they will find a suitable home that is so wild and isolated that no GMO crops are to be found anywhere in their foraging range. (That is a pretty hard bill to fill these days, unfortunately) I have also never particularly tried to stop the swarms from happening in the first place, as I know many beekeepers do (I also don’t make my livelihood from beekeeping), so I guess it is a good thing I don’t really care when it happens. If I had invested time and energy in trying to suppress swarming I suppose I would feel differently!

I’m not sure what the difference was this year, but each of the five swarms was accessible to my desiring hands. Last year, to the best of my knowledge and observation, I had four swarms come from the same two hives and every single one of them was at least forty feet up in the air. Two of those were probably upwards of seventy feet. My sweet husband even went so far as to put the extension ladder in the fully extended loader of the tractor, but to no avail… he still couldn’t reach. 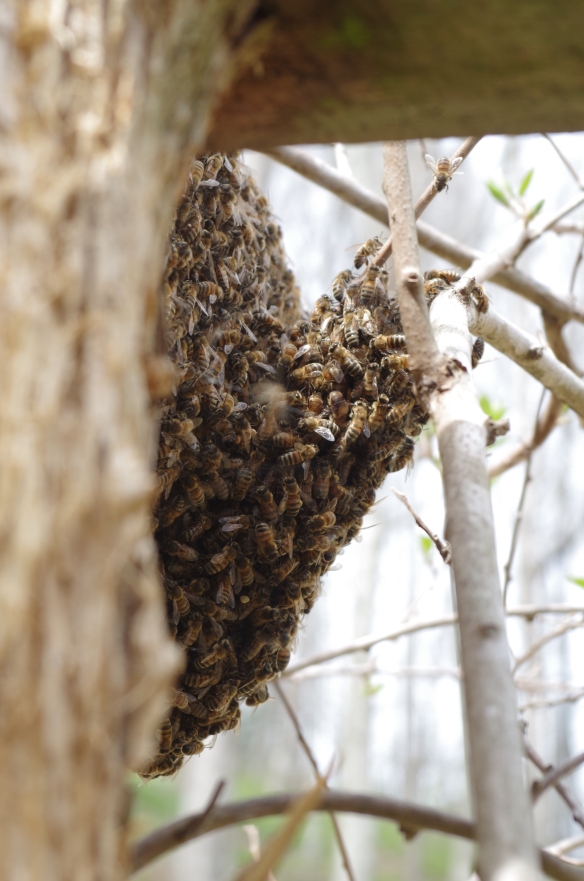 This year, the kiwi trellis attached to our outdoor kitchen seemed to be the hot spot for the honeybees to congeal after the mass exodus from the hive. Four of this year’s swarms landed there, a mere eight feet off of the ground. Kind of a dream come true!!! But because of the gangly nature of the kiwi vines, and the structure of the trellis, I had to slowly scoop or brush the bees into the hive boxes; I couldn’t just snip a branch and lower the whole mass into their new home. The one remaining swarm was slightly higher in a mulberry tree, and this did require some monkeying around to be able to reach. Oh, but sweet satisfaction in succeeding on that one! I can only guess that the two swarms that I missed left so quickly because it was threatening to rain or they had already scoped out a new home. But I am not a bee, so I will never really know for certain. 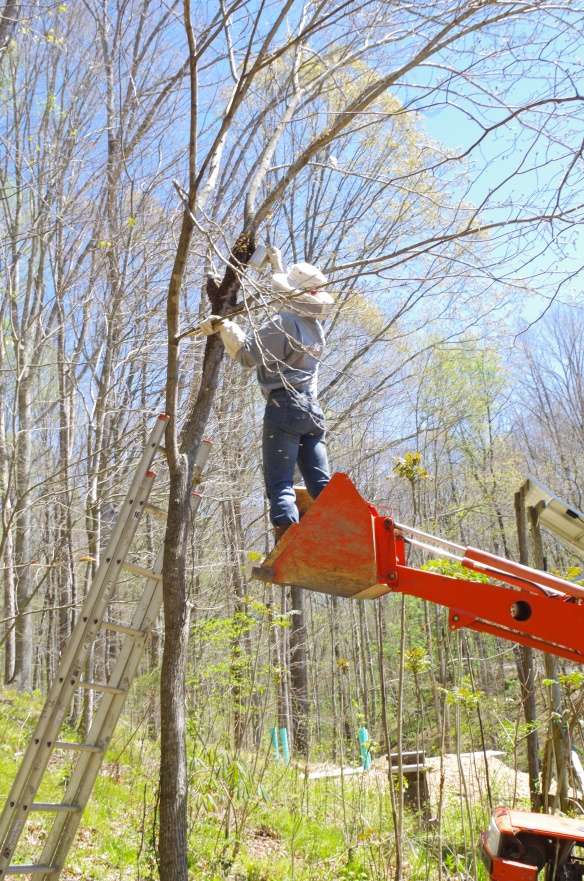 What I do know is that I have THREE new beehives! And that I need to order or build some new equipment pretty darn quick because I had to piece together hives for the swarms in a hodgepodge fashion and I have no hive bodies remaining when it comes time for expansion! Or, heaven help us, if another swarm comes!!!

The fact that I was able to witness all but one of these swarms actually happen (and Opal saw the one I didn’t) seems like a very generous gift from the cosmos. Especially since it is spring and there is quite a frenzy of farming and lambing happening right now as well. (More on those next time.) So I will say my thank-yous to the forces that may be, and declare myself even more intrigued by the mysterious honeybee than ever before. 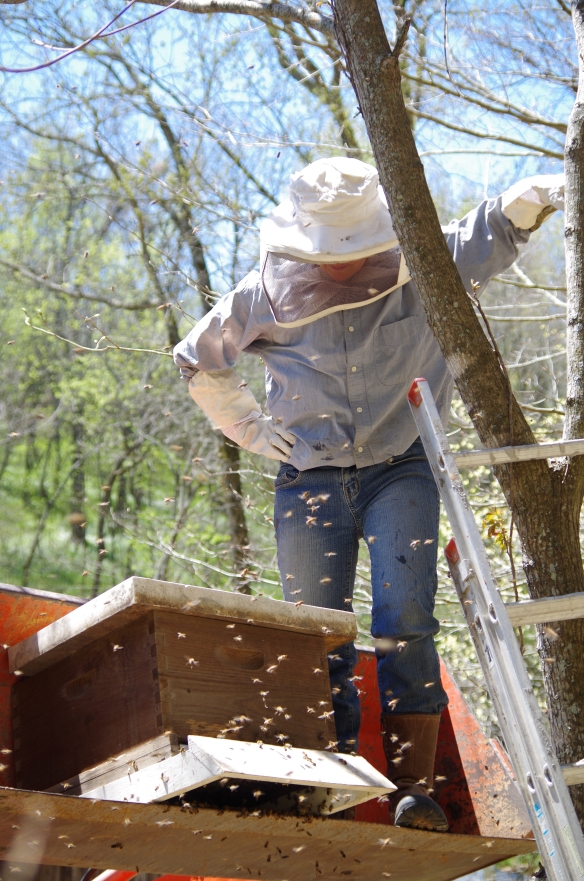 Sometimes, as winter is fading, you feel the need for hats and mittens and scarves and sweaters lessening just a bit. And, for some of us, being on the backside of winter means your brain may feel a little sluggish and dull and desperately in need of some sunshine and color. And maybe a little mental stimulus, too. And you might also feel the seasonal spring work creeping in and you face the reality that those long winter evenings spent by the fire with a knitting project will soon be a distant memory…

Well. As you might have guessed, I might just be describing my personal reality right now. Kind of over winter, but not yet ready to face spring. Kind of over knitting hats (and how many hats does each family member need anyways?), but not at all ready to put the knitting needles away. And even though I am a great lover of neutral colors, I am kind of over gray right now, too.

So to give myself a challenge, and a fun burst of color, I wiped the dust off a book that has been on my shelf for years… Apparently waiting patiently for just the right opportunity to reach out a grab me by the collar: “Amigurumi Knits” by Hansi Signh. I will not encourage everyone to try amigurimi knitting. Mercy. (I got my mental challenge!) However, I am a wierdo virgo and meticulous shit strikes some deep and resonating chord with me. Plus, isn’t it just downright humorous that someone figured out how to get from sheep to snail with sticks and wool? 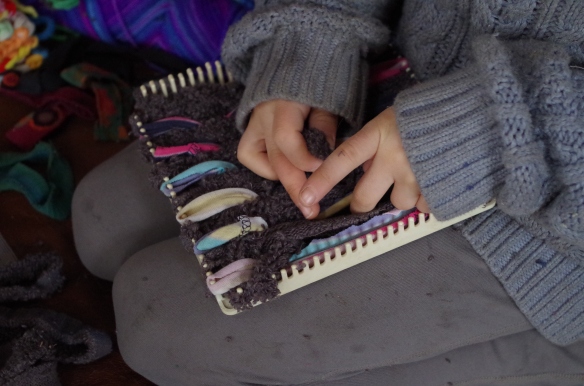 I am especially hard on socks. I can wear holes in them at an astounding rate. And once a pair of socks has holes in the soles, I really can’t stand wearing them any longer… unlike my incredibly frugal husband who has the tolerance to flip hole-y socks around, wearing the bottoms up, to extend the life. Call me spoiled, but that is one trick I refuse to adopt for the sake of pinching a penny. I would rather go without socks altogether.

I also think my rapid consumption of socks is why I’ve never really taken to knitting my own. I would wear them out faster than I could knit a pair.

Anyhow, after a recent cleaning out of my sock drawer my ever-so-creative little miss Opal sat pondering the pile of rejected and forlorn socks with holes. I could tell her brain was getting busy thinking of the promise all of those wool socks held. She politely asked if she could borrow my very sharp scissors and the next thing I knew, that girl had a pile of stretchy pot holder loops cut from the shafts of those socks that were headed to the rag bag. 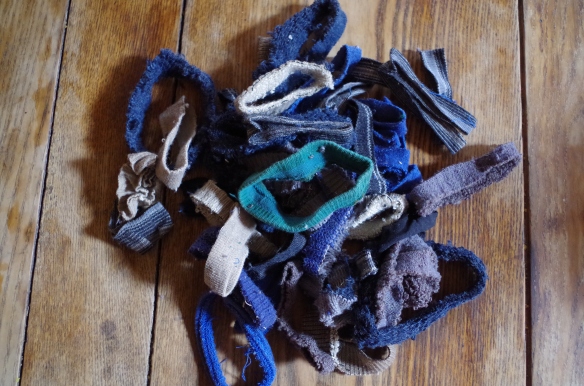 And shortly after that, she had a pile of recycled, repurposed wool (and some cotton) pot holders.

Being that it is the winter and many moons since my children last had the opportunity to make a buck or two at our farmers’ market, and since their piggy bank’s bellies are sorely hungry, there is much talk of “I could sell this at market…”

So if you find yourself desperately in need of recycled sock pot holders, be sure to pay Opal a visit at our farmers’ market this spring. She will be there and she will be happy to take your money.

Potatoes recovering from their frost kiss and looking about ready for the next hilling. #ilovepotatoes
SHETLAND SHEEP FOR SALE! Lambs, yearlings, and ewes. Lots of ages and colors to choose from! I’ve had over 30 lambs born this spring and I can no longer keep them all! Totally grassfed and raised on organically managed pastures. Message me with questions. We also have Katahdin sheep for sale but holler @bugtussleeric for details about them. #shetlandsheepforsale #sheepforsale
Work in progress... raised bed building for our homestead kitchen garden and a more permanent home for perennial medicinal herbs that never seem to find a happy home in our annual garden plots. It always feels like such a bonus to even get started on infrastructure type projects, especially when we do all the work ourselves and it’s spring and there’s a million other things going on... so even though this is far from complete, progress is at hand.
A sea of flowers. A whole hilltop cover crop where walking is more like swimming through seaweed... not knowing for certain if that next step will take you down or if the tendrils will be kind enough to let you carry on your merry little way. I dream of actually being able to swim through fields like this with bees dancing off my eyeballs as ocean phosphorescence does when you swim with eyes open wide...
It appears another honeybee swarm is taking up residence in our shed. Holy shit I can barely wrap my head around it. After the last shed swarm I felt like a lucky dog. Now I’m feeling cosmically blessed. (After the first swarm got settled, I moved them to my apiary) As I can hear the hum of giant tractors on all the neighboring farms, literally every bordering farm, working the soil into oblivion in preparation for genetically modified monoculture crops which will inevitably be sprayed with toxic chemicals, coupled with most of the surrounding forests having been recently decimated by aggressive logging practices, I can’t help but think the bees know that here, on this farm, we will honor their presence and work hard for them... providing diverse forages and healthy ecosystems so they can proliferate. #thankfulforhoneybees
We set a bunch of transplants into the garden yesterday and this morning before the rain started so I thought I deserved a little knitting time. Current WIP is the #zigzaghat from issue 38 @taprootmag knit in wool from my very own #mamasdamnsheep

This is my church of pink
We're getting a grip!
By the way, all the planets they find, suck.
Order now. Kale, lettuce, chard.
My tulips last forever