END_OF_DOCUMENT_TOKEN_TO_BE_REPLACED

We’ve been involved in these conversations lately about Life’s Work. How this artist or that just HAD to write, or draw, or compose. They were called to create, and it seemed as though they had no choice but to obey. How fortunate, to have that calling, I thought.

But then, I thought some more.

I thought while I was making this hat from the awesome green wool that was tended and dyed by my friends at Hill and Hollow Farm.  And I thought while my daughter wrapped her mind around division and practiced dancing all over whatever floor space wasn’t taken up by my son’s wooden train tracks.  I thought while cooking dinner in the same space with my fellow man as he pressed soil blocks and tinkered with the rice huller he’s building.  I thought while walking in the mud (wonderful mud), by the daffodils, the waiting wet garden, the swollen creek. 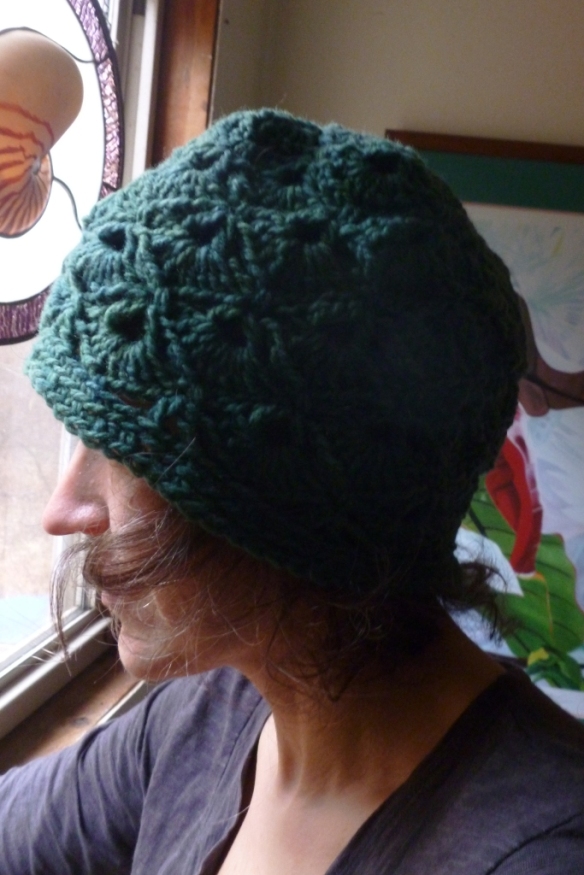 I thought about spring, and the garden, and farming and the graceful stewardship of life that happens on so many beautiful farms and homesteads around here.  I thought about parenting (there’s always a lot to think about there).  I thought about meaningful work, healthy families and friendship and kindness and compassion. 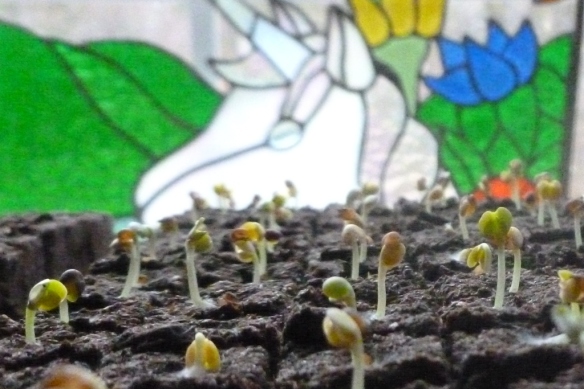 I think now that the invisible creations might be the most important ones.

Let me add to that: The trick is knowing it, and participating, with love.

This corner of the world was such a small place when I was a child. Relatively, it still is I guess, but for those of us who have been watching for awhile, the growth seems tremendous. Most folks knew each other, and it wasn’t too hard, even if you happened to dial a wrong number, to figure out who you accidentally called instead and have a nice chat with them.

Likewise, there were no big roads. Not only were the roads small, they were usually winding, too. Guard rails were few and far between, and lots of curves were blind with a blasted stone face on one side and some kind of steep drop off on the other. When driving, we had to watch out for ourselves, and one another.

One thing that used to be common practice here was the steering-wheel-wave. As two cars approached each other on one of these two lane roads, the drivers acknowledged each other by lifting an index finger, or one hand, off the steering wheel. It was just an acknowledgment. I see you. We are sharing the road. Some of the old timers would out and out wave at cars going by, particularly if they seemed to be driven by friends or kin of theirs.

We used to laugh at it as teenagers. Those quaint, small town habits seemed silly in those years, but of course, we picked up the habit too. I nearly caused a couple of wrecks lifting index fingers at folks going by in metropolitan areas in other parts in the country. My fellow drivers didn’t seem to understand that my gesture was friendly.

As time has gone by, some of our roads have widened. The big highway going through the county east/west particularly. Because of this big road, what was a once a 45 minute drive from our little hamlet to the county seat now takes less than half an hour. It has led us to feel more connected to the places that once may have seemed a bit distant. There are up-sides and down-sides to that perception that I won’t tackle here. It has also increased the amount of big rig trucks on our roads, and it has decreased the amount that we acknowledge our fellow drivers.

It’s just harder to register the people in the car hurdling toward you at 55-60 (or more) miles per hour. You might have known who they were, but by the time you recognize them, they’re long gone. There’s more room to avoid each other, and less space to a acknowledge one another. More people have moved here from different places. Our population has grown. The old codes of conduct do not necessarily hold.

But they are not gone altogether.

I ventured out into town one day during the thick of the snow and ice that had us in its grip. The big road was clear, but the side and back roads were still veritably sheets of ice, even in town. And the steering-wheel wave had returned. People were looking out for each other. We had all slowed down, and we were all paying attention.

As cold as it was, and is again, now that four more inches of snow has graced us, I am warmed by this. For as much as civilization as a whole can sometimes look like a failing experiment, when I can meet the eye of my fellow traveler and exchange an understanding that we both deserve safe passage, I can still believe in community. And I’m grateful to live in this one.