It was a joke I had with a cat, once. She would ask to come in, or inquire for dinner, and I would show her my hands and say, “Look! I have hands, fingers, and thumbs! Ha ha!” At the time, I guess I was thinking that night vision and the ability to run on four legs kind of made it even.

I’ve had cause to re-think that lately, on the advent of our first bottle kid.

Our oldest goat had her kids in late February. The delivery was smooth enough, if a little exhausting, at 3 a.m. Probably she could have done it without us, but I was glad we were there to witness. Birth is always special.

The twin kids are beautiful. A doeling named Lollipop, and a buckling named Buddy Booboo. Mamma goat Annie cleaned up her kids, everyone nursed and cuddled up, and we went back to bed.

Lollipop wandered from her cozy shelter with her mother and brother and stood out in the rain. She got chilled, and by the time I saw what was going on and put her back under cover with her mother she was already too thin, and didn’t express an interest in nursing. Mamma Annie called to her and licked her, and tried to nudge her back towards the teats, to no avail. Thus, the great advantage of hands and arms. I could pull my babies to me. I could hold them. Annie can’t do that.

We kept Lolli in the house for a few nights. She seemed to be having seizures. I would wake at 2 or 3 a.m. for a night feeding and many times wondered if I would find her alive. She was not happy to take the bottle. We took her back outside for as much of the daytime as possible to hang out with her goat family.

There is a sensitive time in the life of goat kids on our homestead in which they are small enough to slip through the holes in the goat pen fence. Since most kids are intimately attached to their mothers, they don’t go far. They take themselves right back through the fence to get to the milk bar.

I kept trying to put Lolli back on her mom. But eventually Annie lost interest in trying. She still responded to Lolli’s cry, gave her an occasional sniff, but little more. Because Lolli is not attached to her mother, when she wiggles through the holes, she has no reason to wiggle back.

We lost her a couple times this way, not seeing which way she went, and having to track her down as she trotted out into the winter woods, where a fawn colored goat kid, looks just like the forest floor. I was amazed each time we found her. Eventually, she slipped out on a rainy dusk when I was busy putting the final touches on dinner.

Headlamps on, hoods up, we scoured the woods around the goat pen. We looked at the nooks under logs, down the steep banks of the creek, in the brambles of roses and blackberries. We exhausted our flashlight batteries. We walked under the dark, trees dripping with rain, the first songs of the tree frogs ringing in the night.

It was a somber dinner, so tired, knowing she couldn’t make it through a night alone in the rain. We reviewed the facts. We had done the best we were able. If her instincts were not developed enough to keep her coming home, this was just a way of nature taking its course. But it didn’t stop us from being sad, from wondering what we could have done better.

I awoke at 11:30 that night to the sound of Annie calling out. Again, her lack of hands foiled her – she heard a cry, but she didn’t have a flashlight and couldn’t operate the gate, so all she could do was cry out in return. I, on the other hand, scrambled for a headlamp and coat and ran out into the yard and listened. Sure enough, a little goat-kid cry came from up the hill. My heart thumped. I thought – this means something just got her and now she’s a gonner for sure. But then she cried again and I rain for the noise.

She was tangled in the remnants of an ancient woven wire fence line. We had walked it in our search without detecting her. She was sopping wet. Skinny. But strong enough to holler.

I untangled her and carried her down for Annie’s inspection. Then I took her into the house, dried her off, and lay her in a box with a hot water bottle. I waited for pneumonia to set in, but it didn’t.

In the following few days of her recovery, she pitched herself off the porch, and fell down the stairs in the middle of the night. But she also started taking the bottle willingly, and nibbling on dry leaves. Her seizures stopped. Much to my amazement – she lived.

It’s a mighty job, a big responsibility, having hands, arms, this oversized brain, and heart. We mess up a lot.

It’s not hard for me to understand why many farmers don’t bottle feed the little ones who struggle.  Were our herd much larger, or our management system not so, um, “intensive”, I don’t know that she would have made it this far.  Lolli is still a little behind the curve. Despite our hours of investment, she does not act like the other goats. Her coat isn’t as soft, and she isn’t as strong or playful as her brother. She doesn’t stay with the herd when they graze. She follows our children like a puppy. Her future is still uncertain. But to have NOT put our hands to work would have been denying an instinct toward life. There are times when instincts conflict with reality, and there are hard choices to be made. But this was the first time for us. We had to try.

After all, we have hands, not hooves. 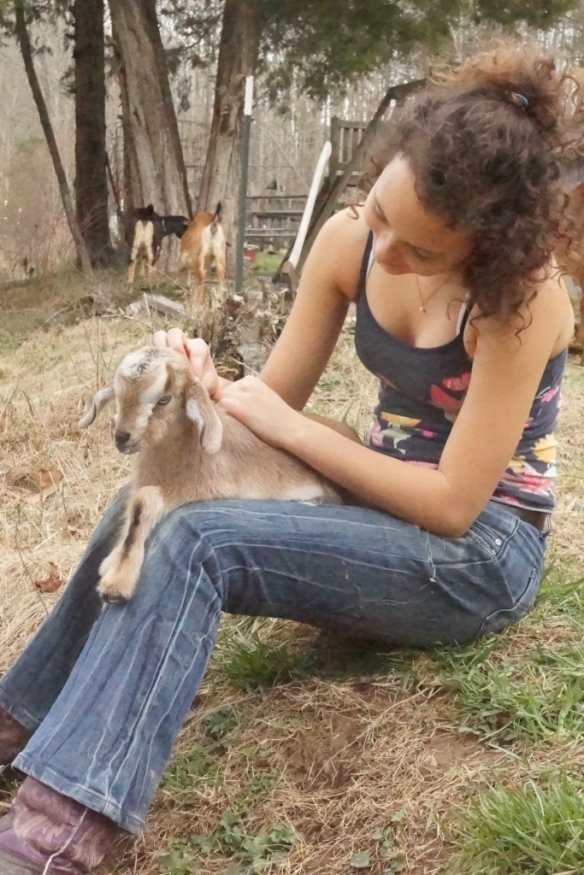